ECIS 2015: “A forward looking EU Strategy on Culture and Creativity” – The European Creative Industries Summit 2015 in Brussels: A short review

More than twenty speakers, among them the European Commissioner for Education, Culture, Youth & Sport, Tibor Navracsics, attended the European Creative Industries Summit (ECIS) on Monday, 11th of May, in Brussels. As its title“The Cultural Creative Entrepreneur in the 21st Century” suggests, the summit dealt with the many ways culture and creativity can find “a European answer fueled by European values” (Dieter Gorny, Special Advisor for Creative and Digital Economy to the Federal Minister for Economic Affairs and Energy, Germany, in his keynote) to the digital and global challenges of our time. Thereby Gorny referred to what the EU Commissioner had stressed before: “The cultural and creative sectors have shown great resilience during the crisis – they actually continued to grow – while stimulating creativity and innovation spill-overs in other sectors.” 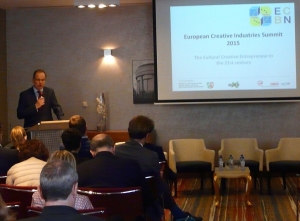 As Tibor Navracsics pointed out in his keynote, “talent must be seen as a ressource” and creative networks need to promote this in a large scale. This was later demonstrated via nine presentations by members of the European Creative Business Network (ECBN) from nine European countries, which presented their “National Agendas for Creative Industries in 2016”, among them Zanda Tamulone, Ministry of Culture of the Republic of Latvia and Prof. Pier Luigi Sacco from Milan. 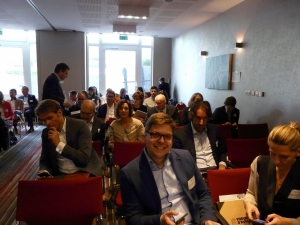 Furthermore, the panels and dialogues included worthwhile contributions by speakers like Axel Ganz of Forum d’Avignon, Johanna van Antwerpen of ECIA and the Amsterdam Economic Board, Mehjabeen Price of Creative England, Prof. Lutz Engelke of TRIAD Berlin and Funda Celikel Esser of Joint Research Centre, Brussels (see quote in headline). Funda Celikel Esser presented the work of the COmposite INdicators Research Group (COIN), an important partner of EU policy makers, helping them to shape policy and monitor progress in fields such as culture and creativity. The same panel, called “The European Research Agenda 2016: Cultural Creative Spillovers”, also saw Richard Russell (Arts Council England) and Toby Dennett (Arts Council Ireland) present their work in the same field, with a public debate on cultural creative spillovers to be launched via Wikispace on the 11th of June 2015. (http://ccspillovers.wikispaces.com) 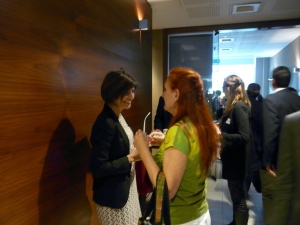 The day had begun with a meeting by the members of ECBN that will result in a “ECBN Policy Manifesto 2015”, with its original version published via the ECBN homepage on Wednesday, 13th of May to be debated by the European public until End of May. During this meeting a new member was welcomed by Bernd Fesel, Chair of ECBN, too: Italy’s Foundation Campus, represented by Enrica Lemmi. Bernd Fesel about the growth of the network: “ECBN has established itself as collaborative platform for creative industries in Europe over the last three years, already representing about 75% of its workforce through the leading intermediares and agencies of 14 countries. This year’s European Creative Industries Summit shows it clearly: Cultural creative entrepreneurs can and will be heard in Brussels. The European Creative Business Network thanks all its members and guest speakers as well as partners (Forum d’ Avignon) and supporters (State of North Rhine Westphalia; creativ wirtschaft Austria) for their important contributions to achieve this goal.”

A full report on the European Creative Industries Summit 2015 will follow in a few weeks via ECB Network. Until then you can find some more impressions and statements here: