Werkspoorkwartier, Utrecht: From anonymous enclave to a lively destination

On 19 June, the second Co-Creation session was held in Utrecht with the aim of developing a concept for an interactive story tour for the Werkspoorkwartier. In the intervening week after the first session the creative professionals worked on differences in the prototypes for the design of the tour. 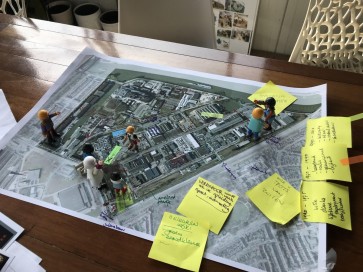 The session on the 19th started with a presentation of the different prototypes and ideas. This input was used to arrive at a joint concept and a storyboard for the tour. The concept behind the tour is to realize interventions in the area based on the letters of the word Werkspoorkwartier and to offer content along different layers. The aim of the interventions is to support the transformation of the area. From anonymous enclave in the city to a destination where people can work, learn and recreate. The tour will consist of various parts such as information boards, an audio tour, artworks and augmented reality interventions. With an analysis of impact and feasibility, the first follow-up steps have been defined. The Sprint method was used to quickly move from idea to feasible concept. External stakeholders such as local residents, the director of the community museum and people from the business organization gave feedback on the concept and on the first artist impressions at the end of the session. In September, a first prototype version of the tour will start. The intention is to do the realization in phases, depending on the funding that will be realized. In this way it becomes an organic growing story of Werkspoorkwartier. Every year new interventions and new layers will be added. The tour will develop over the next few years parallel with the development of the area.

The second Co-Creation session in the Netherlands was led by Gabrielle Muris (Urban Impact) and Bianca Ernst (Hof van Cartesius). 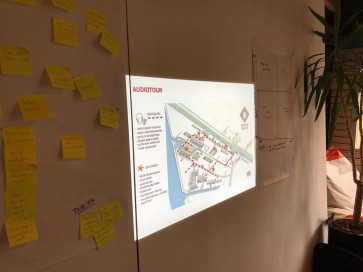 The co-creation session is part of the project CO-CREATE, that has been made possible with the aid of European funding, made available through the Erasmus+ framework. It is an initiative of six partners committed to supporting the creative industries sector across Europe: Creative Region (Austria), University of Art and Design (Austria), Academy of Fine Arts and Design (University of Ljubljana, Slovenia), Deusto University (Spain), Creative Industry Kosice (Slovakia) and the European Creative Business Network (The Netherlands).