Major Challenges for the Mayors Challenge

Where are the creative industries in the Mayors Challenge, asks ECBN’s Bernd Fesel?

Twenty-one cities in Europe have been shortlisted as innovators in local government as part of the the Mayors Challenge, a philantrophic initiative by Michael Bloomberg, the Mayor of New York from 2002 – 2013.The initiative will award 9 Million Euros to five of the cities, as part of the Bloomberg government innovation program which aims to make a difference in two ways – first „to generate ideas that will improve city life“ and second to „getting cities to work together to overcome common obstacles“ and to make „cities more effective“.

While these aims are too good to disagree with, questions remain. Is an award the best tool to implement innovations in public administrations which were not been built for change, but for fostering stable frameworks for society’s challenges like innovative companies, population growth or religious diversity? And is a one-time-innovation project a good changemaker for an ever-lasting public system?

The announcement of the twenty-one shortlisted European cities is a good opportunity to evaluate the expectations of the Bloomberg initiative against the reality of the innovation projects proposed by cities participating in the second call. In short: How good are cities at creating innovative projects? Can administrations, with employees who may have no experience in taking risks and disincentives for doing so, really be inventive or innovative?

The cities were expected to propose „an idea (that) „should be bold and creative, and should include a fresh new approach to solving a problem in your city. “ Also the city project should be a first mover: „We are the first city to …..“

So, the reality of the shortlisted project proposals has to be reviewed in regard to the type of innovation – product / market / game innovation – and to the phase of innovation – incremental / revolution. And it should be taken into account that the projects are limited by a three-year implementation phase and, of course, by the award funding. In terms of evaluation, the projects can be grouped by topic and a theme like the Mayors Challenge does in its press announcements – from youth unemployment to social isolation. To evaluate innovation other criteria and views might also be helpful. For example, which innovation tools are used regardless of the topic? Are these tools sustainable in the future in a changing digital world? Are they open innovation systems?

Based only on the project summaries published by Bloomberg Philantrophies so far, nine projects can be interpreted as all applying open access philosophies to innovate: York aims to increase civic participation and Gdansk to re-instilling faith, while Bristol addresses obesity, Barcelona supports elderly, and Athens creates a public platform for ineffective governance.

Another eight projects apply digital tech or online platforms to reach out to untapped potentials – reaching from audio tools for blind people in Warsaw to geothermal mapping in Schaerbeek, from harvesting underground power in Madrid to gaming against youth unemployment in Amsterdam.

Three projects apply post-industrial and decentralized industries ideas – like Stockholm with a user-produced biochar, Florence with a maker do-it-yourself community or Cardiff with many small steps of productivity – rather than one industrial plant.

In innovation policies it is common also to mix open access and digital tech to form very powerful innovations (as Chris Anderson describes, the maker generation). In the Mayors Challenge 2013 – 2014 projects like gaming against youth unemployment, audio tools for the blind and networks for the elderly represent the new world of innovation in the digital age: a local problem which can be solved by digital tech and thus is able of being copied at almost no cost in a thousand other cities around the globe. Whereas projects like harvesting underground power or reinstalling faith in democracy sound like projects which can not be scaled and copied – they might be limited by local conditions which are not transferable, or at least demand high investments which are hard to come across.

Open access, digital tech and the blend of the two are tools to make cities more effective that are sustainable in our digital future – and so is the majority of the city projects shortlisted by the Mayors Challenge.

However the second question remains unanswered: Are these innovative ideas to increase city effectiveness also fit for “improving city life”? Has the second aim of the government innovation program of Bloomberg Philantrophies been fulfilled as well?

Effectiveness is an aim clearly addressing the public administration itself – it is about institutional reform of democracy at city level. Improving city life however addresses the inhabitants – persons as well as companies. In this Mayors Challenge some projects in London or Athens, Brno, Gdansk and Sofia focus to increase civic engagement or self-reliance, but not one project relies on the city inhabitants as a resource for innovation. Not one city had the idea to tap the creative and social capital of millions of peoples and companies. Not one city had the idea to generate projects for a better life by asking the talent source and crowd source projects. Not one city had the idea to improve the innovation and creativity capacity of its population in general – however the projects “informal education labs” (Bologna) and “increasing productivity” (Cardiff) must be acknowledged as projects building on talent source.

It comes as a surprise that in the second Mayors Challenge creativity and creative industries are neither a strategic topic nor a general tool for cities in Europe to improve the quality of life – despite the fact that creative industries in Europe is a sector employing more approximately 6,7 million people and accounts for 3,3 percent of GDP (EU Communication 2012 537, Promoting cultural and creative sectors for growth and jobs in the EU). Why do mayors miss the opportunity to employ the economic and social value added given by innovations of the creative industries as a broader strategy – from design thinking in health industries to 3D-Printing in architecture and gamification for climate change? (Mobile Art Units for urban regeneration and gaming against unemployment are the few exceptions giving hope.) At least in Europe, the Innovation Union and Agenda Europe 2020 put these topics on the top each city’s agenda.

To motivate cities to tap the benefits of social innovation (futur2, Harald Welzer), the promises of the 3rd  industrial revolution (Jeremy Rifkin) and the advantages of the knowledge society in a digital age (makers, the new industrial revolution, Chris Anderson) by fostering talent and creativity in its own population and creative industries in its economy is the next major challenge of the Mayors Challenge. 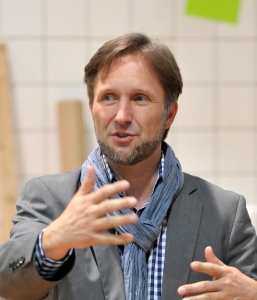 Bernd Fesel is ECBN’s Chair and an independent promoter, researcher and senior  advisor in the Cultural Creative Industries in Europe. @Bernd_Fesel