“Europe must make active use of its cultural and creative forces” – that was the main headline from the Conference of the Latvian EU-Presidency on Cultural and Creative Crossovers.

For the first time a Culture Conference welcomed representatives from the Directorate Generals of Education and Culture, Growth, and Connect as well three minister‘s of culture from Latvia, Luxembourg and The Netherlands – who  will host the EU-Presidency in turns until mid 2016.

This high-level alliance for the continuous support for the cultural creative sectors, follows the Latvian kick-off for cultural creative crossovers. “We are making history here”, summed up moderator Ragnar Siil from CreativityLab.

ECBN Chair Bernd Fesel opened the conference arguing for the concept of crossovers as network-, knowhow- and production effects from the cultural creative sectors which make a major contribution to the wider economy and society.

This concept can be found in crossover projects such as Rebuild by Design (New York, 2012), the invention of the Morse Translator (1836) or the Israeli and Palestinian Youth Musicians for Peace, Heartbeat (2014).

Bernd Fesel, ECBN chairman, argues that the recent wave of interest from policymakers in the concept of crossovers  is part of a broader trend: the change from a zero-sum-economy to a circular economy where all outputs of a sector are conceived as potential inputs into other sectors. Values crossing sectors become the main way of creating value in the economy. Crossovers signify a move from traditional capitalism, where one’s win is anothers one’s loss, to an economy where one value creation brings about more value creation in other sectors.

What is the role of culture and creativity in this change?

ECBN sees their role as pivotal: “Without cultural creative crossovers, the current transformations in economy and society – driven by the digital revolution – will fail to lead to a liveable society.” 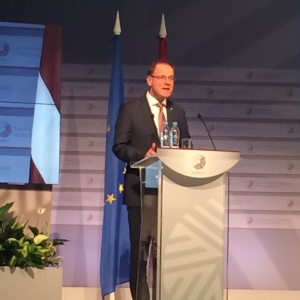 At the Crossover Conference of the Lativan EU-Presidency in Riga. we called for the implementation of two types of crossover policy tools: a sectorial and an ecosystemic approach receiving high level political attention for our claim. In a letter to ECBN, EU Commissioner Navracsics commented:

“The new Investment Plan for Europe is highly relevant for the SME in the CCS, in particular as it will target smart infrastructure. We very much welcome the involvement of the European Creative Business Network in the discussion on the priorities of the investment package and thank you for identifying the importance of the creative industries. In this context, we take due note of your suggestion to set up a Cultural Creative Advisory Group for Smart Infrastructure as a subgroup of the Investment Task Force.”

ECBN has put cultural creative crossover on the Juncker Agenda for the New Investment Plan for Europe, which came up once again in Navracsics speech in Riga:

” the EUR 315 billion Investment Plan the Commission has put on the table can certainly benefit the many small and medium sized businesses in the cultural and creative sectors.”

Dace Melbārde, Latvia’s Minister of Culture , concluded the conference by highlighting the priority for cultural creative crossovers beyond the Latvian EU-Presidency term – important as she introduced CCS for the first time to the Competitive Council of Europe: a crossover itself from cultural to economy policy. 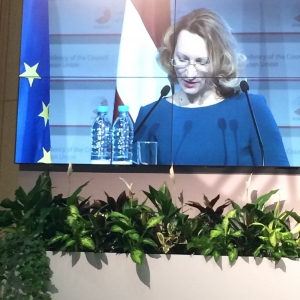 Dace Melbārde, Minister for Culture of the Republic of Latvia