The European Commission Startup Europe (SE) Initiative announces its first ambassador. Throughout the years, SE has been a collective effort of hundreds of stakeholders, movers and doers in tech and startup field. The impact of this initiative could not have been possible without the immense support provided by this community. The community that is currently taking part in the growth of SE as a bottom-up movement has been invited to be SE Ambassadors. Check the full list at: http://startupeuropeclub.eu/startup-europe-ambassadors/

“Armenia has become the fourth of the EU’s Eastern Partner countries, after Georgia, Moldova and Ukraine, to join the Creative Europe programme. The relevant agreement was signed on 20 March by the EU Commissioner for Education, Culture, Youth and Sport, Tibor Navracsics, and the country’s Minister of Culture, Armen Amiryan, at a ceremony in Brussels”. 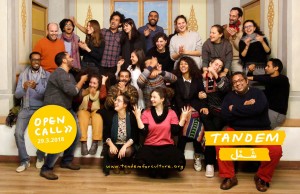 “#TandemShaml is now open for applications! The fifth round of our cultural collaboration programme that supports experimental and lasting collaborations between changemakers from the Arab region and Europe. Apply now at http://www.tandemforculture.org/stories/open-call-tandem-shaml-2018-2019/”.

20 Mar, 2018, UNESCO: Discussion on the implications of unlawful trade of cultural property

“On the 20 and 21 March, at UNESCO France, representatives from EU Member Sstates and art market stakeholders discuss the implications of unlawful trade of cultural property. Check out EU-UNESCO project on illicit trafficking: http://www.unesco.org/new/en/culture/themes/illicit-trafficking-of-cultural-property/partnerships/european-union/due-diligence-in-the-art-market/”.

“The creative and cultural industries are an increasingly important piece of the puzzle. These industries – design, fashion, film, television, radio, music and much more – have all too often been overlooked as legitimate avenues for jobs and gross domestic product. But that is starting to change. African governments should embrace and support the creative industries in their efforts to drive sustainable development and create jobs”. Read the full text at: https://www.ft.com/content/9807a468-2ddc-11e8-9b4b-bc4b9f08f381

“Auteur is one of those words, like diva and masterpiece, that has been devalued to the point of redundancy. Prolonged misuse has resulted in a situation in which any director with an immediately recognisable style, or a recurring set of themes and concerns, is an auteur”. Read the full text at: https://www.theguardian.com/film/2018/mar/23/the-end-of-the-auteur?CMP=share_btn_tw

“As a result of their meeting through the Peer-to-peer scheme, ECHN members ATÖLYE and FabLab Lisboa are starting a new international program titled Designer-in-Residence, and launching an open call for designers. The Designer-in-Residence program of ATÖLYE, provides designers the necessary equipment, material and expertise to develop their designs. For the second edition of the program, ATÖLYE is looking for its new resident who will have a chance to work at ATÖLYE’s transdisciplinary and innovative workspace”.

“Arts Council Malta has announced the list of winners for the first edition of Il-Premju għall-Arti, the national arts awards which celebrate the achievements of the cultural and creative sectors. The award acknowledges excellence in artistic work premiered during the preceding year and are unique in their focus on culture and the arts”. More info at: https://www.artscouncilmalta.org/news/il-premju-ghall-arti-winners-announced

24 Mar, 2018, SQW: Survey on the Access to Finance of Enterprises from the Cultural and Creative Sectors

Access to funding is one of the key barriers encountered by entrepreneurs and companies working in CCS. The EC is exploring the level of ‘finance gap’ for CSS companies, and the potential need for public intervention to support their financing needs – reviewing their experience and which financial instruments might be best suited to meet their needs. The EC has commissioned an independent study being led by economic consultants SQW, to gather evidence on this. CCS companies can complete the survey until Thursday 19 April 2018. More info and survey: http://survey.sqw.co.uk/s/ECCulturalandCreativeSectors/